We can design molecular wires for you wholesale 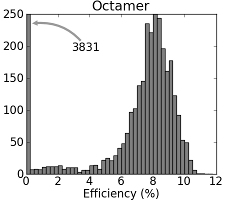 As part of a project led by Dr. Geoffrey Hutchison (University of Pittsburgh), I have been collaborating on the development of a method to design so-called "molecular wires" (conducting organic polymers) for use in organic solar cells. Using a combination of computational chemistry and cheminformatics, we have been able to find organic polymers with the required electronic structure predicted to perform well as the electron donor in solar cells.

This work is now available as an ASAP at J. Phys. Chem. C:


Rather than repeat the abstract here, I'll summarise the general idea. Current solar cells are based on semiconductor technology and are expensive to make both in terms of materials and energy. Organic solar cells, while never going to be as efficient at converting light to electricity, offer the possibility of cheap solar energy due to the ease of manufacture and low cost of materials. In 2006, Scharber et al described how to calculate the efficiency of an organic solar cell based on the electronic structure (i.e. HOMO, LUMO) of the solar cell components, so the question was: could we find organic polymers with the required structure to maximise efficiency?

To cut a long story short, we could. What we did was combine Open Babel/Pybel (for structure generation and forcefield optimisation), Gaussian09 (for ZINDO/S//PM6 calculations), cclib (for extracting the results) and a Python script implementing a genetic algorithm, and out popped molecular wires predicted to be highly efficient. The top candidates were then filtered according to additional criteria et voilà. Overall, over 90,000 polymers were tested - still only a small fraction (about 4%) of what we'd have had to test without the genetic algorithm.

If you're interested in a copy of the paper and don't have access to the journal, get in touch - we can distribute a number of copies through the ACS website.
: 17:29

Great this was all done with Open Source!

<serious mode="dead">
Is there really no Open Source QM tool that can come close to the quality of Gaussian09?
</serious>

I don't know of any open source implementation of PM6 or ZINDO/S. The closest is the old Mopac (in the public domain) which has PM3. We specifically wanted the new improved PM6 as it has been shown to give geometries close to those obtained by DFT but at a fraction of the cost. The ZINDO/S method allows calculation of the lowest energy transitions (to figure out the wavelength of light absorbed).

MOPAC2009 is free for academics, but there are very few semiempirical open source QM programs.

I'm trying to clean up a ZINDO code in C++, but it's slow going, since it's a free-time project. The plus side would be that Gaussian doesn't allow you to adjust the ZINDO parameters (or add ones from the literature for new elements).

But for computational screening of lots of geometries, it's hard to beat semiempirical methods.

According to its Wikipedia page and also its Code, CP2K does PM6 (along with some others like AM1, MNDO, PM3) in the QuickStep program.

See also this page for the input description.

However, although I have packaged and uploaded CP2K to Debian I have to admit I never used it really and it looks not very easy to figure out. Also, no idea whether this only works for periodic systems or others as well.

I had another look around today and found MolDS, which is apparently a newly written (C++/Boost) semi-empirical package supporting ZINDO/S:

It does not support PM6 though, but CP2K (http://sourceforge.net/projects/cp2k/) seems to do it rather well.