The RSC - Value for money?

I don't usually advertise for chemical societies, but in these recessionary times I thought the following might be of interest to some readers.

RSC members have:
Sure, chemistry societies organise conferences, enable networking, provide travel grants, and lobby politicians; but any society that doesn't look after its most vulnerable members by providing discounted pizza is not a society I want to be a member of.
: 17:13 1 comment:

Have your hamburger and eat it - Edit molecules in PDFs II

In Part I, I showed how to hack some code together that allowed you to paste images directly from the clipboard (e.g. from a PDF) into Beda's BKChem, a 2D drawing program. The magic conversion from image to chemical was done by Igor's OSRA.

Well, Igor has taken this idea and run with it. The latest version of OSRA now includes plugins for BKChem, Symyx Draw, MolSketch and Pipeline Pilot.

If you use the Windows installer, the Symyx Draw plugin is automatically installed and adds an "Import Structures from OSRA" option to the File menu. The first time you choose it, you will need to change the path to something like "C:\Program Files\osra\osra.exe" under "Settings...". Here's the plugin in action: 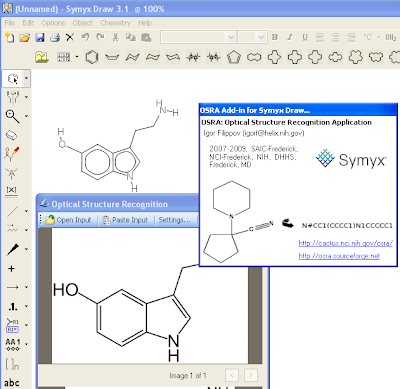 Note that the other plugins appear to be only available from the Windows .zip release.
: 16:22 3 comments:

How do enzyme mechanisms evolve?

Evolution is a fascinating topic. Although the principal mechanism by which evolution occurs is quite simple to understand, namely the introduction of changes (mutations) into the DNA, the consequences that follow are enormous.

The term selective pressure is used to describe an imaginary operator that affects the incidence of particular mutations in a population. What makes evolution difficult for me to get my head around is that selection operates on many levels. In a population, a particular physical characteristic might be more advantageous (think of the famous finches) or more attractive. In your DNA, a particular mutation might preserve the amino acid coded for, or it may change to another amino acid that does not affect the protein's function. On the other hand, if the amino acid is involved in the catalytic action of the protein it's going to be conserved, right? But then how do new mechanisms evolve?

My former postdoc supervisor, Dr. John Mitchell, is currently advertising a PhD position on "Modelling the Evolution of Enzyme Catalysis" at the University of St. Andrews. I'm particularly interested in this project as it builds on earlier work I carried out in the Mitchell Group along with Gemma Holliday and Daniel Almonacid. Here's an excerpt from the project description:

We will create a simulation using a population of model enzyme-catalysed reactions, mimicking a state early in evolutionary history, and allow them to evolve in EC space. The reactions will consist of steps and be represented, in a manner familiar from genetic algorithms, by "chromosomes" describing the chemical properties of each step. Parameters will control the likelihood of different kinds of evolutionary event, such as a change of substrate with the same underlying chemical mechanism, taking place. The simulations will be calibrated, and then compared with the results from a study of real-world convergent and divergent evolution. 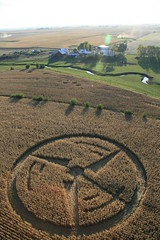 There are a couple of journals that have rather generous margins around the text. I prefer to print out two pages per sheet to avoid wasting paper, so it would be nice to be able to remove those margins and increase the size of the text instead.

pdfcrop by Heiko Oberdiek allows you to do just that. It's included with Debian Linux, and "sudo apt-get install texlive-pdfetex" will install it. On other (lesser) Linux distributions you may have to check CPAN or CTAN. Once installed, a straightforward "pdfcrop withmargin.pdf nomargin.pdf" will do the conversion.

Update: A reader points out that Tex Live 2008 includes pdfcrop and is available for both Windows and Linux.

Note that pdfcrop should not be confused with PDFCrop. There's also a patch of pdfcrop called pdfcrop2, but I think that covers the current crop.

And spare a thought for Fermat.

A colleague has just pointed me to ChemPad, an interesting piece of software that allows chemists to draw chemical diagrams directly into a computer on a Tablet PC. It was designed as a tool to enable undergraduate chemists to quickly enter chemical structures and generate 3D diagrams with which they could gain a deeper understanding of structures. Hash and wedge bonds are understood and are converted faithfully to 3D, for example.

From the point of view of teaching chemistry undergraduates, such software may be preferable to ChemDraw and friends as it allows them to develop the skill of drawing diagrams by hand. Of course, not everyone has a tablet PC but one could imagine similar software for the iPhone or just a regular PC driven by a mouse.

ChemPad is free but not open source, and Windows only. The ChemPad website has tutorials and videos of the software in use.
: 16:33 1 comment: