Turning vim into an IDE: Part 1

Probably like many other users of vim (or gvim), I have never taken the time to set it up so that it works like a modern IDE with auto-completion, syntax checking, and whatever else. I've decided to start sorting this out.

My starting point is the following _gvimrc (in C:\Users\noel) which sets the behaviour of the tab key and indentation for several different file formats. I also highlight whitespace at the end of lines so that I don't add it by accident.

Testing webapps from Python with Selenium

I'm a great believer in tests to ensure code quality, although naturally I don't always practise what I preach. Recently I've been working on a webapp with a Python server backend. I can test the server independently of the webapp, but testing the webapp itself involves clicking on various things, waiting for the server to respond, and then checking the result. Doing this manually quickly becomes a chore and that's without even considering different browsers.

The solution is Python of course (as usual on this blog). The aptly-named Selenium allows you to automate this sort of thing from the point of view of writing tests. It's available in several languages (I think they all use the same server backend) but I'm going to focus here on the Python. "pip install selenium" on Windows installs the basics; this will allow you to test against Firefox and Safari. For Chrome and IE, you need to download two additional files and add them to the PATH.

Anyhoo, here's a modified version of the Selenium script that I'm using just to give some idea of how it works. When you run this at the command-line, a new Firefox window pops up, resizes to the specified dimensions, flies through the test, shuts down, and then I get the usual unittest output from the Python script. Specifying a browser name (e.g. Chrome) runs the test against Chrome instead.

In my continuing quest to never use R again, I've been trying to figure out how to embed points described by a distance matrix into 2D. This can be done with several manifold embeddings provided by scikit-learn. The diagram below was generated using metric multi-dimensional scaling based on a distance matrix of pairwise distances between European cities (docs here and here). 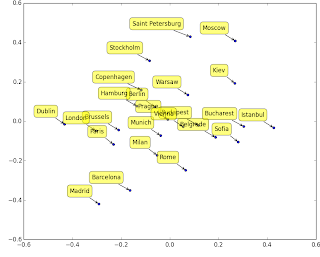 Notes: If you don't specify a random_state, then a slightly different embedding may be generated each time (with arbitary rotation) in the 2D plane. If it's slow, you can use multiple CPUs via n_jobs=N.
: 14:09 10 comments:

When I started the QM Speed Test I was afraid that I'd lose steam (and face!) before getting too far along. At the same time, I hoped that others might be inspired to send in some results for their systems and QM packages. This would make it easier for me (since half the work is setting up the input file), verify that my results were not pure invention, and extend the speed test to packages to which I don't have access.

I've just checked in the results for NWChem 6.3 compiled on Centos (also 6.3). But in the meanwhile, others have shot ahead by forking the speed test and checking in their own results:

Dudes, I salute you.

Let's start with my results. Rather than repeat the table here, you can check out the figures on the Github page. The summary is that NWChem is quite a bit faster at geo-opts than ERKALE. This is a combination of more steps in the geo-opt, and faster energy calculations. So if you are using some of ERKALE's other features, it would probably make sense to geo-opt first with NWChem. I did recompile ERKALE with "-O3 -ffast-math -funroll-loops -fPIC -march=native" and got a 10% improvement but that's not enough to change things.

From the other calculations, what do we now know? Well all of the packages tested can actually do geo-opts at the HF/6-31G and B3LYP/6-31G level of theory. Figuring this out by looking at their websites is not always as easy as you might think. Also worth noting is the relative slowdown when using B3LYP versus HF. In some cases the slowdown is of the order of 30-40%, in other cases the DFT calculations are twice as slow.

Michael's show that NWChem is faster than any of the other Open Source QM packages tested. Very useful information; again, it points at a large time-saving by using NWChem for the initial geo-opt before turning to whatever package you need for the subsequent analysis. Eric has compared several proprietary packages (I was going to say commercial but I can't tell if ORCA is available for purchase) and Q-Chem is much faster than ORCA and Dalton.

What we haven't looked at is scaling. Maybe the orders all change when we double the size of the molecule and increase the basis set. But that's a question for another day. Right now, the goal is to get as much breadth as possible on the original question.

1. Boy were there some quirks with this one. First of all, although the instructions on the website give everything in terms of the CShell (remember csh? - big on Unix, not so big these days), you can just use the bash equivalents.
2. I wanted only single-CPU calculations so I tried to turn off MPI support. My first attempt "USE_MPI=n" caused build failures, and the only way to get around build failures appeared to be to delete the folder and untar the source again. Following the instructions on this post, I used "export ARMCI_NETWORK=SOCKETS" instead.
3. My favourite quirk was that when you untar the source, the generated folder has a really long name which causes a compile failure after some time as follows:
Renaming to "nwchem" also failed (different error - can't find something or other I think). Renaming to "nwchem-6.3" worked.
4. I couldn't figure out how to get NWChem to use the system lapack library but got it to link to blas as described in the docs.
: 17:52 15 comments: