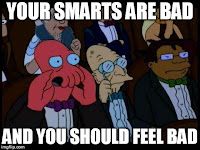 One of Roger's observations came to mind recently when I was looking at some SMARTS patterns in Open Babel that were causing some problems: "People cannot write SMARTS correctly." Instead, he argues, they should use tools to create SMARTS for them. The problem is not so much that patterns don't match molecules of interest, but that they match additional molecules (false positives) and may miss others (false negatives). False positives are a particular problem when transformations (e.g. SMIRKS) are applied to matching molecules, as they can result in exotic valence and charge states that were unintended.

The following is a description of a tool I put together to help craft SMARTS patterns. It is based upon the idea that a SMARTS pattern is completely defined by the molecules it matches. Thus, by looking at the matches in a database of sufficient size, we can see whether there are any mismatches.

So far, so obvious. What's novel is that the tool only returns distinct matches based upon simple atom types of the matching atoms, and sorts them by probability of those atom types (most unusual first). Thus, even for common substructures the number of hits is small and information-rich. Furthermore, by using my favourite trick of sorting the reference database by size (ChEMBL here), this means that the first hit found for each distinct match is likely to be small in size.

An example will illustrate: let's suppose we want to create a SMARTS pattern to match alcohols. I know that "CO" in SMILES indicates this, and so let's start with that. Only 28 hits are returned (from a 10% subset of ChEMBL), of which the first three are:

Ok, obviously we don't want a charged oxygen, so let's try "C[O+0]" and look at the first three hits:

Now, about that carbon. I only had sp3-hybridised carbons in mind, so how about "[CX4][Oh1+0]"? Here is the full list of hits at this point: 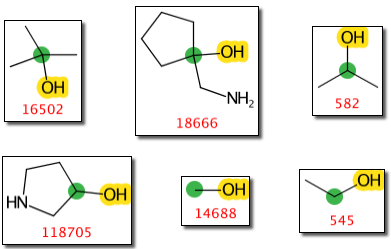 At this point the hits are what I expected to see. Does this mean I should stop here? No, but it's a reasonable start.

After using this tool for a while, you begin to appreciate the importance of nailing down exactly what you want to see: if you only want to match neutral carbons, you should say so; if you don't want the oxygen to have additional neighbours, you should say so. Once every degree of freedom is nailed down...then it's finished. You might think this is going too far, but the molecules that exist in databases don't necessarily conform to typical valence rules - they may be unusual (consider TEMPO) or downright incorrect. Your SMARTS pattern should match exactly what you had in mind and not leave any wiggle room to match anything more: "[Cv4X4+0]-[OD1h1+0]"

This tool is by no means a panacea; you still need to think for yourself, and consider for example what to do about aromaticity, or the presence of explicit hydrogens or hydrogen isotopes, or whether to reorder the pattern for speed. But one could imagine a tool that could ease the burden further and do some of this for the user, or for example allow the user to mark "match" or "don't match" for the set of hits returned to automatically refine the query.
: 20:48 6 comments: