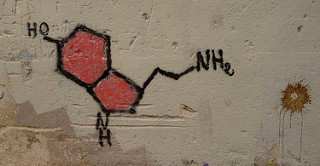 After a certain length of time, there comes a point when you realise that that idea of yours you always planned to pursue, well, you're never going to get around to it. Such is life and all that.

But maybe if I post some ideas here, it might spark someone else's imagination and lead to something. A mention in your Nobel speech is all I ask (preferably close to the start).

So here is something I worked on last (academic) year...

In collaboration with Dr JJ Keating (University College Cork) I was interested in finding some selective 5-HT2A receptor agonists. Turns out everyone else wants to find selective 5-HT2C agonists and so 2A is neglected. As far as I could tell, there are no known 2A-selective agonists. Such a compound would be useful both as a tool compound but also has some therapeutic potential for glaucoma.

To begin with I turned to the literature to see what had been done. In short, I never found any paper describing the search for a selective 2A agonist.

But then I thought of ChEMBL. Despite the fact that no-one had been looking for a selective 2A agonist, maybe there are some accidental examples to be found in papers on selective 2C agonists? So I downloaded the entire database, and searched for all instances where activity (EC50) for the same compound in the same paper was measured against both 2A and 2C. And lo and behold I found a few examples, the best of which was compound 5 in Bioorg. Med. Chem. Lett., 2005, 15, 4555.

So in short, your mission (if you choose to accept it) is to repeat the analysis, take these compounds as a starting point and to develop selective 5-HT2A agonists through a medicinal chemistry strategy. Note that a similar approach towards receptor subtype selectivity might yield useful results for other receptors.