Streamlining the handling of aromaticity

I've done a bit of work over the last year or two stripping back some accumulated cruft in Open Babel. One question that's been on my mind during this process is how much can you simplify the toolkit's core but yet leave it capable of complex behaviour?

Take the case of aromaticity handling. Just this part of the toolkit on it's own raises many questions. Should aromaticity be lazily perceived or require an explicit function call? What happens when the user modifies a molecule? What about copying a molecule? Or just copying a subset of the atoms to another molecule? What should happen when you add two molecules together? If you read aromaticity from a SMILES string, what if it's a different model than the toolkit uses internally? Should the SMILES writer reperceive aromaticity, or just use it as presented?

I'm a firm believer that there's no point adding features or improving things if you don't write documentation explaining why/how/when they should use it. What's the point doing this work if no-one knows how they can take advantage of it? So, I've just written up documentation on how Open Babel handles aromaticity. The following (exclusive!) excerpt describes how aromaticity information is stored by Open Babel.

How is aromaticity information stored?¶

There is a catch though, or rather a key point to note. OBMols have a flag to indicate whether aromaticity has been perceived. This is set via the following API functions:

The value of this flag determines the behaviour of the OBAtom and OBBond IsAromatic() functions.

See https://open-babel.readthedocs.io/en/latest/Aromaticity/Aromaticity.html for the nail-biting conclusion to this thrilling exposition.
: 08:18 No comments: 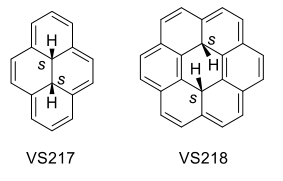 What happens when four software developers get together and compare their implementations of the CIP rules? This is the background to a recent preprint deposited in ChemRxiv.

The CIP system is a series of rules that describe how to assign a stereodescriptor (e.g. R/S, E/Z) to a stereocentre. When Bob Hanson decided to add support for CIP to Jmol, rather than simply read the rules and implement it according to his interpretation as others have done, he decided to work with three other implementations to challenge each other on disagreements and clarify the wording of the rules.

The result is described in:

Essentially, the issue that the authors are addressing is the fact that existing implementations even in "highly respected software packages" disagree with each other (see John Mayfield's presentation). By comparing the implementations in Jmol, Centres, Balloon and ChemSketch they were able to identify cases where:


"(a) the disagreement was due to different interpretations of CIP rules among software developers, (b) there was a problem with an algorithm or its implementation in code, or (c) the CIP rules themselves were flawed."


In all cases, however, they were able to come to a consensus, which led to "the discovery of a small number of errors in the Blue Book, two minor flaws in the CIP rules, and a proposal for a new rule".

The paper walks through their discussions of each rule in turn, looking at any issues arising and clarifying any ambiguities. It also includes a validation suite (browse it here) that covers all aspects of the rules and will allow future CIP implementations to avoid the pitfalls that have beset the field in the past.
: 11:32 No comments: