cclib is a Python library for parsing for analysing comp chem log files from many different QM packages. GaussSum is a GUI that uses cclib to monitor the progress of comp chem calculations and calculate predicted spectra for comparison with experimental results. cclib is the work of Adam Tenderholt, Karol Langner and myself, while GaussSum is just by me.

New releases of both of these are now available for download at their respective websites: http://cclib.sf.net and http://gausssum.sf.net. For help, email cclib-users@lists.sf.net or gausssum-help@lists.sf.net. Here's what's new in these releases:

A new home for Linux4Chemistry? 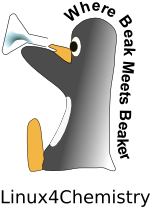 Are you interested in taking over the stewardship of the Linux4Chemistry website? This website was setup by Nikodem Kuznik in 2001 to promote the usage of Linux for chemistry by listing chemistry software available for Linux, both commercial, free, and open source. In 2005 I took over its maintenance, moved it to its present location and made some changes including the awesome logo. I am currently on the lookout for someone interested and willing to take over the running of this site. Update (25/02/2103): A new home has been found.

Why am I looking for someone new? Well, I think I am no longer the right person to maintain this, as the goals I wished to achieve have already been met. To me the idea of promoting Linux as a platform for chemistry software today seems obsolete when almost all chemistry software vendors target Linux at a minimum. Every docking program is on Linux, every QM package runs on Linux, etc.

In taking over the website I also had the goal of clarifying the distinction between Open Source software and software available for free. To this end, I added license information to all of the software, and made it possible to filter the results by license type (I was very proud of my tongue-in-cheek logo for Shareware software). I think that today more people are aware of this distinction and in any case, I'm not sure that L4C is really playing a role here.

It is also true that while at the time my desktop machine was running Linux (Debian Sarge I think), since then I do most of my work on Windows but use a VM for Linux. And it's harder to maintain something which is outside my day-to-day usage.

So I'm looking for someone to bring a new vision to Linux4Chemistry and shake it up a bit. If you are this person, get in touch.
: 18:50 No comments:

A compilation of speeds - Compiler face-off

I have a Linux Mint 12 VM (VMWare) on the same machine, so let's run the same executable under Wine on Linux:
37.3s (MSVC++ 32-bit under Wine/Linux)
...so it's slower, pretty much as expected. The not-an-emulation layer slows things down a bit.

How about the MinGW compilation described in the previous post?:
24.1s (MinGW g++ 4.6.2 32-bit)
g++ beats MSVC++. To be honest, I was a bit surprised to see this, although I understand from Roger that g++ is surprisingly highly-optimised for cheminformatics toolkits. Maybe we should look into an official MinGW release in future.

What about Open Babel compiled with Cygwin's g++?:
39.5s (Cygwin g++ 4.5.3 32-bit)
As expected it runs like a pig compared to the MinGW version. Cygwin's handy, but when you're in a hurry it's maybe not the best choice.

So, in short, the fastest way to run Open Babel on Windows is to use a VM to run Linux. Huh? The like-with-like comparison of MinGW's 24.1 versus Linux's 14.8 is the most intriguing. It suggests that the slowdown is either due to rubbish file I/O by Windows, or sub-optimal platform-specific code in Open Babel's I/O handling code.

Either way, it's a pretty interesting result.

Notes:
1. Hardware was a Dell Latitude E6400 bought 3 years ago (Core 2 Duo 2.4 Ghz, 4GB Ram) running Win 7 64-bit. The timing was the best of three after timings had stabilised (the first one or two is usually a second or two slower).
2. After the initial post, I compiled clang on Linux, and then used it to compile Open Babel. Running the conversion took 15.3s.
3. Also, I ran the MinGW compiled version under Linux, and it took 30.7s.

If you want to compile on Windows using GCC, you have two alternatives: Cygwin's GCC and MinGW's. The one from Cygwin is easier to use (easier installation) but has the disadvantage that the resulting software does not run natively on Windows, various system calls go through Cygwin's emulation layer which slows things down. Here I'll show how to compile Open Babel with MinGW.

I've previously found this a bit confusing. This time I did a manual installation by creating a folder C:\MinGW, and then downloading all the relevant dlls on the installation page. To do this quickly just middle click on several links, wait a few seconds, and then hit Save on all the dialog boxes. Once they are all downloaded, move them to C:\MinGW and unzip them there.

No need to install MSYS (a kind of build environment for MinGW) for a project such as Open Babel that uses CMake to build. Why do I mention it then? Because the MinGW page talks all about it.

1. Add C:\MinGW\bin to the PATH
2. Get Cygwin's stuff off the PATH (if it's there). This is most easily accomplished by renaming C:\Cygwin to C:\oldCygwin or so.
3. Configure CMake to create makefiles for MinGW. I had some problems (at runtime) with a shared library version, so I went with the static one: 4. Build it with MinGW's make. Hmmm...I wonder if it's as fast as the MSVC-compiled version we distribute?
: 09:31 2 comments: