Many Python programmers will be familiar with the concept of achieving high test coverage (e.g. via an analysis tool such as coverage.py), but they should also know that high coverage does not mean that everything is bug free. So where can you go from there?

One option is to use mutation testing. This is based around the concept that at least one test should fail if the code is "mutated". Now, mutated is a bit vague but consider changing a plus to a minus, or a "break" to a "continue" in a Python script. If your tests still all pass, it means that they don't sufficiently cover all scenarios.

Let's take a look at the codebase I just released, partialsmiles 1.0. I'm going to use cosmic-ray to generate and test mutants. To begin with I've installed it into a virtualenv. The Scripts folder contains the executables I'm going to use:

Note that on Windows I've found that it doesn't always stop all of the running Python processes so I needed to kill them directly through the Process Explorer.

Looking at the report, 1514 mutants were generated and 25% survived. Yikes. Here's an example: 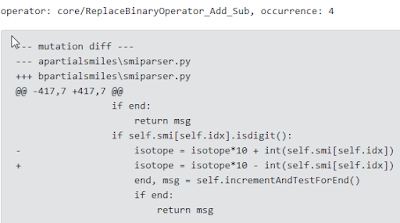 The plus was changed into a minus and all of the tests still passed. The line itself is covered by the tests - I have a test for a two-digit isotope - but I am not testing the returned value.