Following on from earlier posts (here and here), I got to thinking again about molecular depiction using text. The solution I arrived at in Part II had a couple of drawbacks:So obviously there was nothing for it but to write some code myself for depicting lines as ASCII, which is essentially what I've done with ASCIIPainter, now part of Open Babel. You could use this to draw an arbitary image, but let's check out how it works for molecules: 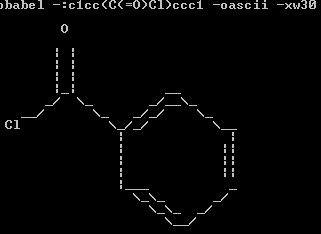 It didn't work quite so well for text pasted directly into this blog as the aspect ratio was quite high (i.e. low resolution in the y direction), but once I hit upon adding style="line-height:100%" to the pre tag it was much improved:I've added an output option to help tune the aspect ratio (-xs). Also, multimolecule output is supported, and a fun pastime is to watch ASCII depictions of large libraries fly by at the command line.
: 20:54

That one looks really great!

A similar functionality has been present for quite some time in the Cactvs Chemoinformatics Toolkit. Its ASCII rendering module optionally supports color, and allows the use of Unicode characters for double bonds, so that it can display more compact renderings.

You see a practical use in the MySQL UDF extension for interactive structure queries.