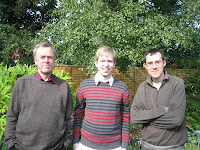 You know you have arrived in Liverpool when your first sight on exiting the airport is a yellow submarine. The mug you just bought showing the cover of Sgt. Pepper's Lonely Hearts Club Band is also a good clue.

The 1st Open Babble meeting took place this week in Chester, UK, near Liverpool and Manchester. For the first time in its 7 (8?) year history, the developers of Open Babel met each other and discussed issues such as whether we should open brackets on the same line or on the next line. Well, that and other more serious questions. Many discussions aren't really suited to email, and so this was a chance for us to cover a whole variety of issues in a short space of time.

We (Marcus, Tim, Chris and I) worked off a agenda of topics pre-suggested through a Google spreadsheet, keep very brief minutes to record decisions/action items, and brought Geoff in remotely through Skype after sending around the minutes. Although we had a couple of slides prepared here and there, in general it was all round-table discussions. It worked out pretty well I think.

This Open Babble involved core developers only, and we are going to continue such meetings in future. However, just as a matter of interest, are there people out there interested in a user's meeting, e.g. a 1-day workshop or something of that nature? I've added a poll on the left-hand side where you can indicate your interest (or lack thereof). (Update: Poll now over)
: 15:20

I couldn't find your poll on the site...